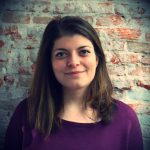 Claudia Minchilli researches how Romanian, Somali and Turkish  migrant women who live in Rome use digital technologies. She adopts a postcolonial and post socialist conceptual framework in her analysis of transnational digital practices.

Claudia’s research is focused on the investigation of the existent relation between migration and digital technologies, and of its discursive and material consequences on migrants’ experience of mobility, displacement, resettlement and everyday life within a certain urban context, which in her case is Rome.

More specifically, Claudia intends to explore how and on what extent digital technologies can make possible for (Romanian, Somali and Turkish) migrant women to overcome or negotiate with geographical, political, economic, affective ‘borders’ that, using Avtar Brah’s words, “far from being mere abstractions of a concrete reality” are instead “part of the discursive materiality of power relations” (Brah, 1996: 198). Looking at digital technologies as potential spaces for women’s empowerment, discrimination or reproduction of inequalities will enable new perspectives on the study of transnational movements and migrant women’s building of a sense of belonging, affectivity and diasporic identity in Europe.

Being the project’s focus on the study of Somali, Turkish and Romanian diasporas in Rome, this will also allow Claudia to bring out qualitative differences between the transnationalism of different social groups, outlining forms of cultural syncretism (Salih, 2003) and emerging original ways of deconstructing the binary us-Other in the European context. Her approach is strongly inspired and informed by transnational feminism and postcolonial theory, which found her aim of developing a field of studies, within Digital Humanities, committed to the deconstruction of hegemonic discourses which have concrete effects on people and that produce and reproduce asymmetrical social power dynamics which are gendered, racialised and classed (Grewal, Kaplan: 2000).